With over 18 years’ real estate experience and a broad Eastern European presence, Acro Vara group relies on the synergy of its brokerage, development and construction divisions to remain a property-market leader, mostly in Estonia, Latvia and Bulgaria. RigaNOW! met the group’s CEO and the Chairman of the Board of Arco Real Estate at the company’s bright and busy office in Riga.

How would you assess the current state of the residential market in the Baltics?

Tampere: All companies in the industry suffered the same problems during the crisis. We are the only listed company in the industry in the region, so our results are as public as you can get. But the soup is getting thicker. The bottom of the market is behind us in Latvia and Estonia. The number of transactions started to get more frequent at the start of 2009 in Estonia, at the end of 2009 in Latvia, and time is gradually bringing an increase in the average price. Development is our main business. The main interest for us is the number of transactions. In August-September, it was 25 percent higher on the year. The growth rate is spectacular, but unemployment is also high, meaning that the number of potential clients is restricted.

Šmits: There are no statistics on the buyer as final user in Latvia. But auctions are common and banks are taking over more properties.

Tampere: It was never that bad in Estonia. Now, of course, the imminent introduction of the euro is driving speculation and raising prices, and there’s a spin-off effect in Latvia too. Even though the currencies in the Baltics have changed six or seven times in the last 100 years, the psychological effect is still there.

Has the reputation of property as a safe investment been damaged?

Šmits: Many local people are still in shock at the depreciation – how can it be, that the same building, the same bricks, can be worth less than half of what it was two years ago? The crisis showed that there’s no safe haven anymore, not even Tallinn’s Old Town.

Tampere: Everyone who is still here is truly a survivor. I have great respect for all who are here to fight another day. If a company had to close shop, that was a total loss without hope of recovery.

Did you see it coming? What were the signs?

Šmits: I remember in May 2007 sales simply started to die off. I was already accepting any bid. That summer we had the peak of the highest prices, yet even then we still bought assets – if we knew we had a buyer. The Baltic real estate market only really started in 2000, so there was nothing to analyze what was happening, no precedent to refer to.

Tampere: We had seen nothing but growth. We had to learn really fast. Now we’re through it, we’re a lot smarter. Look at how companies came through the crisis – with a conservative approach. It just goes to show – when there’s something left over, save it. There was great temptation to spend. The drop in land prices was the biggest. We had 1,000 units with design sketches. We didn’t want to speculate. We wanted to develop them.

What are some of the differences between the Baltic markets?

Tampere: Of the three, real estate transactions take the longest in Lithuania. There’s more documentation. Lithuania is Catholic. Latvia has the biggest Russian minority. Things like that do affect the business environment. People ask me: why not enter the Russian market? The reason is that while EU countries have a transparent legal system, Russia doesn’t.

Šmits: Latvia is still interesting for Russians. The way Russian buyers handle themselves is completely different. Transactions are made with money weighed by the suitcase. Precise sums don’t count.

Jurmala seems to have a life of its own in Baltic real estate. How is that looking now?

Tampere: Jurmala is simply a rich man’s market. I wouldn’t develop in Jurmala because it’s such a special market. We want to serve the biggest markets with the biggest volumes.

Šmits: Jurmala is hugely dependent on the New Wave music festival, a phenomenon with Russian-speaking TV audiences. If the festival happens to move to Sochi, say, I don’t know what would happen. We made one sale there this summer, to a Belarusian, for €2,500 per sq m. That compares to €1,500 for Riga Old Town and €700 on average in the secondary market.

Tampere: Jurmala has a long history for Russians. It’s in the EU, has a nice beach, it’s close to home and it’s Russian-speaking. New Wave may go out of fashion, but Jurmala won’t. The properties that sell there are very exclusive and built without furnishings. Buyers fill them according to their taste. The high purchase prices are set almost entirely by eastern buyers. If Latvians want a second home they go somewhere else like Saulkrasti. Is the second-home market doing better in Estonia than it is in Latvia and Lithuania?

Tampere: Many of the second-home buyers in Estonia are Finns. Estonia has a much longer coastline with many islands. That compares well to the tight Lithuanian coastline, which has been filled with building projects for the local market. Yet we have to compete with the Finns. Estonians don’t have a great second-home tradition like the Finns do.

The euro is not widely popular in Estonia. Are you seeing a fast rise in property prices?

Tampere: There was a similar fear of joining the EU in 2004. Back then, it had been priced into the asset price already. People knew we would join beforehand; everybody knows now that the euro will come. More Swedes and Finns are investing. But we’ll only know the impact in 2011. In 2004, prices only started moving after it was done. Šmits: Security of assets is the motivating factor. Property becomes more secure and that pushes demand.

How has demand been affected by the Chrisis in central Riga?

Šmits: It depends. If the customer wants something nice, it’s never for cheap. The Chrisis affected the downtown area, but it’s still not for the local market. There are not many renovated buildings with underground parking, which is needed in Riga. During the boom, many people asked about buying to rent. But there was no yield. That’s when people realized something was wrong. A key guideline in buy-to-rent is that 100 rental payments should equal the purchase price. But in Riga the rentals couldn’t match. Now the rental market is growing. For most locals a mortgage is not an option. We’re also seeing demand from foreign students attracted to Riga’s universities, from Scandinavians to Pakistanis. How I see growth is that it must be based on the local market’s capability to buy. Latvians and Lithuanians invested a lot in Varna on Bulgaria’s Black Sea coast. They lost money, as nobody needs an apartment there now. Locals are without a high enough income to buy them back.

Some suburbs and outlying areas of Riga, such as āgenskalns, Bolderāja and Salaspils, are seeing bigger price rises than others. Why?

Šmits: āgenskalns is a nice historical area across the river, but it‘s small with few new projects. There was a mad rush to buy there at the end of the boom years and now it‘s one of the first places to see price rises again. Bolderāja is a Soviet-era soldiers’ suburb close to the coast. Even in the boom it had no new projects. But it has the same potential as anywhere else in Riga. Selaspils is 15 km up the River Daugava from Riga. It’s a commutable distance. Why pay more to live in a high-rise suburb when it’s cheaper with cleaner air in Selaspils? A house can cost €220 a month to heat in winter; it can be €340 to heat a four-room apartement in Riga.

Is now the right time to buy residential real estate in the Baltics?

Šmits: It’s the right time. The market has the potential to rise. Riga, the region’s geographical capital, has great potential. Investing is simple, to buy land and build. But you need to look at whether the local population can pay the big service costs. It will take another year or two to fully recover. Auctions are taking place where if you have cash you can make a quick profit. But banks are not yet ready to sell foreclosed properties and will hold onto them for five years or so. 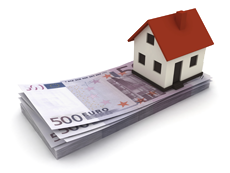